Printerina 2 to use as laser engraver

The new printerina was originally built to be a standard 3d printer. In this page you will see how I modified it to be a laser engraver, replacing the extruder with a Chinese laser

If you remember the new version of the printerina printer, you will, surely, remember that the reason why I decided to build it.
It was to try to create something really small and portable, using only printed components or components easily available in any brico shop.
This was obviously the result I obtained and no problems were encountered during the construction of this new 3d printer.
In order to implement some new feature, different from the standard ones, I decided to replace the extruder with something else to see what can be done with that specific mechanic (delta, marlin and ramps), other than filament extrusion. I found really interesting the possibility to buy a laser and to build a laser engraver.
Common laser engravers are not built using a delta printer as base, and this will be the first example of a laser engraver built on a delta printer chassis.
The first thing I did was to remove the extruder from the new printerina printer: 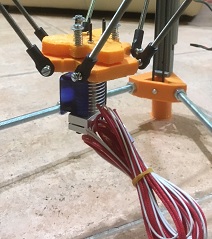 Then I bought a 2500mW 445nm Laser Head Engraving Module

This module has a controller with two different connectors. A first connector is to power the laser and the secondo is to control it via a TTL signal. In theory, you could decide to give full voltage and current to the Laser via the power cable and drive the intensity with a TTL signal.
An easier way (the most common one) is to, simply, power or not the laser incrementing or decrementing the voltage on the power port.
The second option (the easier) is the one I decided to implement.
This is also very useful because in order to implement such configuration, you have nothing to change on the Ramps 1.4 configuration. You will simply get the needed power from one of the available pins not used.
I used the D8 PIN (most common configuration) that is the pin used to run a secondary fan in a 3d printer. Because I've never used an additional fan, that PIN was available on my RAMPS 1.4.
Another interesting matter here is that the specific PIN can be controlled using the G-code command M106. It means that if you write into your code M106 S255 you turn on max power the laser.. If you write M106 S0 you turn it off immediately.
The procedure used to install the laser on the printer was very easy. Here a picture of the laser after the installation is completed. 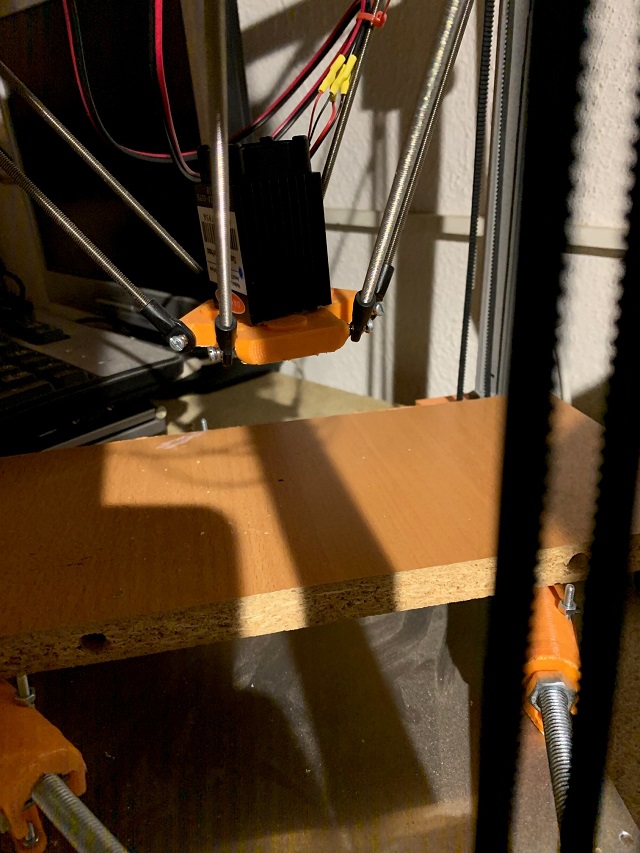 Once the installation is completed, you need to focus the laser. In few words the laser efficiency depends on how much the lens is properly focused on the material you are cutting (or engraving). It means that the laser light must be smaller than possible. Only in this case the result will be optimized.
In order to do this you have two options:
1) Activate the laser at minimum (remember: always wear protective glasses) and turn the focus lens till the light on a piece of wood is minimal.
2) Create a small script (Gcode). This script turns on the laser (Max power) then draws lines at different heights on a piece of wood. Every vertex is 5 mm higher than the previous one. Once the script has finished you will look at the piece of wood and will understand which height is better.
The second approach is the best one and can be achieved running this G-code directly in repetier host (please never forget to wear your glasses): I use the command G1 to move the laser from the current point to the new one in a linear way and every time I move the head of the laser up of 5 mm (in absolute value). From now on the height you found as optimal, will be the height to use. I will explain you how to produce gcode to engrave your objects, without to move the height of the head that will always remain the same.
In the following video you can see how I fine tuned printerina 2 using this G-Code.
Once the right height is found we are ready to start engraving (or cutting) something.
To draw a black and white pattern that we can use to engrave an object, we need a application able to produce vectorial files. The best application (free) I found to do this activity is: "InkScape".
You can download it from the Inkscape web site. To start using this application, you will find many tutorials on internet but, in order to understand how to engrave using a laser you have a plugin available that you must download and install on your PC. The plugin is the J-tech AddOn.
Following the link you will be able to download the plugin for the right version of Inkscape and to start using it. In the same web site you will find very interesting tutorials on how to use inkscape and how to use the plugin to generate G-Code from a draw.
it is really easy and cool.
As you will see, the plugin will produce code with no Z height. It means that you will need to set the right height (the one you found following my procedure) before to start printing. In order to move the head to the right height, use the following code after homing the head: In this G-code command, to execute manually (before to start any engraving activity), you have "aa" that must be replaced with the optimal height you found using the focusing procedure.
With the same plugin, you can generate code to engrave or to cut or you can generate a mix cutting and engraving in the same print.